Rohit Srivastwa is the Founder of ClubHack, the “Mother of all Indian Hacker Cons” and can truly be called the “Jeff Moss”of India :) He is one of those rare few hackers who has the right mix of Hacking, Team work and Business sense.

Rohit has been a great friend and we date back to even before he started Clubhack and I started SecurityTube. I really appreciate him agreeing to speak with us, even though he is very busy with his business and preparing for Clubhack 2012.

VR: When was Clubhack founded? And how many years has it run?

CH: So Vivek, if you remember, we started the activities of ClubHack & SecurityTube almost same time back in 2007.  Our first or so to say India’s first ever hackers conference happened in Dec 2007. We have successfully seen 5 years pass by and now heading towards the 6th edition

VR: ClubHack is regarded as the “Mother of All Hacker Cons” in India.  How did it all start? What was the inspiration behind ClubHack?

CH: ClubHack may have inspired other conferences in India. We have witnessed mushrooming of a lot many conferences in India after 2008.  When it started back in 2007 people in India were still not ready to use the word “hack” so openly. My motive was to make the use of this word easier and make people understand the inner meaning of the same. We in industry used to get a lot of support from community and ClubHack was an initiative to give back to the community.
Strange when you look at this from the eyes of world, but in India in the 2007 we saw a lot of resistance towards the event and the name also. Senior people in industry went upto extent of suggest me to rename the event as ClubAntiHack :)
People including law enforcement & govt. thought we are some underground kids doing something wrong. But lately we have seen a lot of acceptance and support from their side.

VR: What was the reaction of your colleagues, friends and people in general when you told them “I am gonna run the first ever Hacker Con in India?”

CH: “Are you crazy, have you gone mad?” that too in typical Indian language, accent and tone. Except for few who supported me a lot.

VR: How did you find your first volunteers for ClubHack? Was it difficult to convince them to help start a new conference? 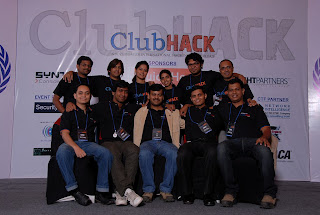 CH: That was easy. I used to teach in Symbiosis College and my students were my first volunteers. It wasn’t difficult to convince them, as they knew me well enough. Not because I could have given them less scores if they didn’t. In anycase “hacking” and “college students” have some interesting relationship.

VR: How many days in advance do you start planning for the conference? And how much work is involved? We are asking this as most people fail to appreciate the sheer hard work and sweat it takes to deliver a fantastic show! 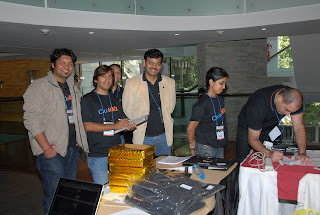 CH: For us the event dates are fixed, first weekend of December. So all the work backtracks from that date. Initial activity internally in teams starts from June onwards. Believe it or not the biggest sweatshop (not sweetshop) is the sponsorship department :) The work involves everything from deciding the theme, ideation, working on CFP, booking the venue, spending money form pocket first & then wait for sponsors, travel, accommodation, audio visual setup, ticketing, getting work done from volunteers, managing press, getting stuff printed, merchandise made, etc.

VR: What keeps the team busy for the rest of the year?

CH: The team came up with this idea of bringing out a free monthly e-magazine on hacking in 2010. Since then every month they release a magazine, which is again done with support of community. The magazine gets published on http://chmag.in and the people of the community send articles. As a part of magazine, we come out with a security awareness poster every month in the magazine itself.
BTW all the members or core team have either jobs to keep and a few have even college to attend. ClubHack is an extra curricular and weekend activity for all.

VR: ClubHack motivated others to start their own Hacker Cons – Can you tell us how you created the ecosystem for hackers in India to do this?

CH: As I mentioned earlier, it was the first time when people saw something of this sort coming in India. Other organizers understood that the initial resistive barrier in people’s mind has been broken; it won’t be very difficult to replicate it. Also it was a community event where people supported most part of it so the community feeling saw the light. We initially had a general discussion mailing list also but had to turn it down due to lot of garbage content coming in and moderation becoming very difficult. You can understand the kind of questions n00bs and wannabe’s starts asking. But the idea was open in wild that yes this niche can be captured. 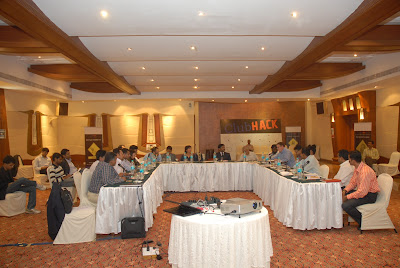 VR: The last time I checked there is now probably some small/large “Hacker Con” in India every fortnight. Almost everyone with a group, now has a Con. Do you think this will help the Hacker ecosystem in India?

CH: To your surprise I’d agree to this statement that yes it helps. What people do is a more formal meetup and call it a conference because “hacker con” is the buzzword. In today’s times there are 4-5 bigger conferences and a bunch of “formal meetups”. The meetups are good at there level to help the community but the bigger conferences are where the serious people want to go. But atleast the waking up of the community is happening. Only the sad part of uncontrolled mushrooming is people now do not take this industry seriously. Everyone is a hero now and arrogance takes precedence over knowledge.  The uncontrolled environment also shows people a lot of magic shows which takes “hackers” mind away from the difference between legal & illegal.

VR: When is Clubhack this year? What all does the conference have this year – Talks, Trainings, … ?

CH: As I said, its easy to remember the dates, first weekend of December every year. So this time it’s on 1st, 2nd & 3rd December. This year along with regular talks & workshops, we are planning to add a hacknight where hackers will spend whole night creating something. It can be a plugin, module, addon, tool, script, anything that is related to security and can make life easy.

VR: You’ve changed your conference goal to “Innovation in Infosec”. Can you tell us a little bit more about it?

CH: When you talk about security and professional’s wish to do something of their own, everyone jumps on to start a VA-PT company. It won’t be incorrect to say there are more than scores of such 1-man, 2-man company in each decent size city in India who do VAPT. Where is the innovation?
This year our idea is to motivate people to look towards creating something. If they want to get into entrepreneurs shoes, go into product side, create something, show the world your real “hackers” skill. We are also heading in the direction of giving the support to these real hackers what they may need such as incubation and funding support

VR: I know all talks will be fantastic but are there are key talks you would like to highlight which are a “MUST WATCH” this year?

CH: As of now CFP is open and the first cut list is not out. I’ll let the community know soon about the “MUST WATCH” talks this year.

VR: How many CFP submissions do you typically receive? For how many speaking spots?

CH: We generally restrict the number of talks to 10-12. We don’t want information overload on people. For these 10-12 slots we get around 50-60 submission per year.

VR: In all the years with Clubhack, which was the most memorable event / experience?

CH: The most memorable event in ClubHack was 2010. After my years of continuous follow up Bruce Schneier finally agreed to fly down to Pune and give the keynote talk. ClubHack2009 also deserves a special mention here because that was the time we saw govt. taking interest in the field and started attending the event in good number. The shift in mind of govt. officials was a very welcome change in India 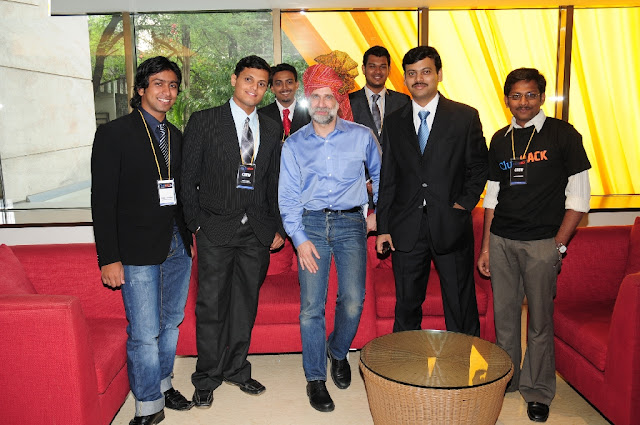 VR: On the other extreme, was there ever a nightmarish situation at Clubhack? Could Clubhack ever have been cancelled?

CH: Again 2010. This year we lost our promised sponsors and Bruce Schneier agreed to come. That was a catch 22 situation. If I cancel the event, I’ll never get a chance to invite Bruce again but if I go ahead and do the event, I’ll be burning deep holes in my personal savings. The event happened and Bruce came, now you know what would have happened to the pocket.

VR: I’ve visited more conferences than I can remember but with ClubHack I’ve always felt a special bond. I’ve felt really welcome and your volunteers and the organizing committee is just plain fantastic! Almost all speakers at ClubHack resonate the same feelings. There is a lot other Cons can learn here. My question – How did you manage to create a “home away from home” atmosphere for us all?

CH: Vivek, a very important part of any conference is to understand the underlying objective. If you are there to make money and take this as business, the attitude will reflect the same. For me & my team too, ClubHack is a place to give. It’s a place to contribute back to the community and make good friends. We haven’t ever thought of ClubHack as a source of income or a business. It’s just an initiative to bring people together and strengthen the community.

VR:  It’s a well known fact that you’ve run ClubHack from your own pocket most years. What motivates you to spend from your pocket every year?

CH: Well not all the years. Sometime sun shines and we break even in expenses. It’s a community thing so I won’t be ashamed in sharing these facts, which are coming for the first time in public.

The money we saved from year 2009 & 2011 has not gone in pocket. It went in running the show & starting of the magazine ClubHackMag.

What motivates? Even I don’t know.  By not doing ClubHack and putting that money in savings, I would have done a lot. May be attributed to my upbringing where my dad spent his entire life in army serving for those whom he never even knew. What a question man, I’m still trying to think what motivates me. 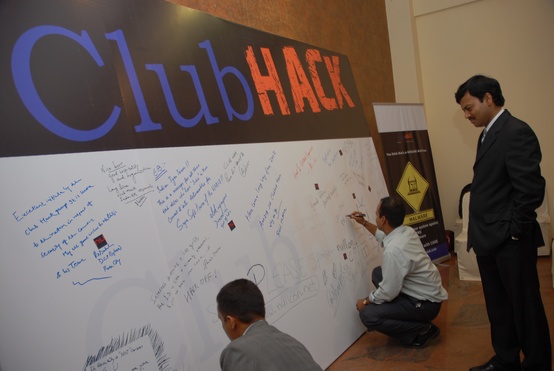 VR: Based on previous years, how many attendees are you expecting this year? Where is the conference venue this year?

CH: This year we are looking for around 300 people.

VR: Party Time!So what’s up for the ClubHack party this year?

CH: Party is still secret. Frankly ClubHack parties are not something people wait for, it’s a regular networking dinner. Last year a friend of mine came with his own band to play & entertain the gathering. We’ll have something more interesting & bigger this time.

CH: Here are a few sponsors from past (in no particular order)

Plus a lot of supporters and media partners.

VR: Thanks a lot guys! We wish you and ClubHack all the best!